TriOceans has spent 8 years curating a photoID catalogue for bottlenose dolphin in Far North Waters and can track how the population parameters evolve.

PhotoID (short for photo identification) is used by researchers to track bottlenose dolphin movements, social networks and habitat preferences. Each fin is unique like a human fingerprint, enabling individual movements to be tracked with minimal disturbance.

How can you count how many dolphins there are, when they are divided in dozens of groups who keep moving around over hundred of kilometres? Scientists have found a work-around: mark-recapture. The concept is simple: if you capture every animal you meet and mark it, at some point you will have marked all of them and no longer encounter unmarked individuals. Count the number of marks you placed and you are done! Don’t worry though, scientists are not capturing and marking dolphins… but taking photos of their dorsal fins. Dolphin dorsal fins are covered with notches and scarring unique to each individual, just like a fingerprint (mostly due to fighting with each other). By taking photos of those fins, scientists can “mark” the animal without touching it. After careful analysis of the photos we can create a Photo-identification catalogue and have a population estimate! This technique is used on many marine mammal species, but also sharks and land animals. 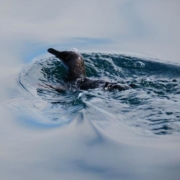